Rebeca’s parents brought her to the U.S. when she was a child, only to be torn from her family decades later when she was deported to Tijuana, Mexico. She was forced to leave behind her parents, brother, and an infant son, finding herself alone in a new city with no connections.

Rebeca was just one of an inaugural group of mothers at a local border shelter who sought a sense of community and hope in the Via Migrante program, run by WE Partner, Via International. She found friendship and family in the group and is now participating in Via’s microcredit program, which WE funding supports. Rebeca is using her first loan, and the training in financial management that she is receiving through the program, to launch a successful mobile pedicure business.

Your support represents a chance for women like Rebeca to create a safe and stable life for themselves and their children. 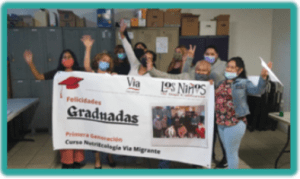